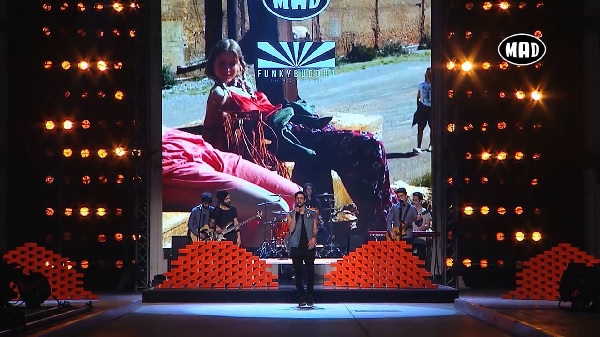 My Music My Story was this year’s slogan for the awards, and surely the “music stories” that were created can support it to the fullest.

With the highest attendance of any other year, the Mad Video Music Awards 2016 by Coca-Cola and Viva Wallet, opened their doors at 18:30, welcoming all those who support the institution over the years and Themis Georgantas, host for 13 years, he was on stage to present the night with his distinctive style.

It all started with Sakis Rouva’s “Everything” and a unique show. Eleni Fourirea, Anastasios Rammos and Konstantinos Angelopoulos created an explosive cover of Taste The Feeling, the song Avicci wrote for Coca-Cola’s new campaign.

Themist Georges appeared on the stage with them. Katerina Lioliou lit fires with the Kings performing “Ice Cream & an Impressive Cover” by Despina Vandi’s “Extremely Bold” Immediately after the audience Christos Dantis and Stelios Leggis and Peter the Great with him Pieces” .

Demy shared the stage with Poli Genova and sang “If love was a crime”, the fifth Eurovision song for Bulgaria. Konstantinos Argyros went up on stage to sing “I Athens and You Thessaloniki” amidst impressive scenes and effects.

Next up on the VMA stage were the Playmen along with Vassy and Tim impressing the audience with both their music choices and the impressive choreography of led shoes in “I Should Have Said”.

The stage really shook off when the sole Elena Paparizou accompanied by a 30-member ballet from Fokas Evangelinos’ school in the brand new “Fiesta” made her appearance on the stage, and then Eleni Foureira made a super appearance with Mike this time guest star Steve Milato with the brand new “What are you looking at”.

Elias Brettos and Naya sang “I Fly High” and “Compass” and gave the baton a special moment of the night. Anna Vissi, after receiving the honorary award, performed the “Interview” and “Manana Again” with her band, as well as numerous Latin dancers.

Nino then sang “Hellas” with a very impressive concept appearance, and immediately after “With Your Voice Gun” OGE, Harris Savva, Demy and Costas Martakis created the ultimate stomp in the arena. with paper war and balloons. The Boys n Noise team up with Rec to reunite on stage to keep the fun unbeaten with the brand new “Do It Crazy” and the success of REC’s “And I Remember You”; The highlight of the night was the appearance on stage of the amazing Imany, a guitar accompaniment that captivated the audience with her voice and justified the fame accompanying her as one of the major new voices on the world music scene.

Stan and Giorgos Papadopoulos had a series to go on stage, performing a medley of each other’s successes, keeping the fun high.

Shortly before the end, Elena Paparizou re-emerged on stage, this time to sing along with Sergey Lazarev on “Ye’re The Only One”, a track that won all of Europe’s audience at this year’s Eurovision show. with the subversive appearance of Konstantinos Koufou who sang his great success “The Most Beautiful in Greece”, with the very impressive Katerina Stikoudis at his side.